Accidents are often a vehicle for a sense of wonder. My accidental encounters fuelled the search no less than silences did.

Herman Blumenfeld, the eldest brother of my great-grandmother Tsilia, was a well-known lawyer in Odessa, an expert in the Napoleonic code, and later, one of the four Jews appointed to the Russian provisional government in March 1917.
Herman had the largest duty stamp collection in the Russian Empire that was partly sold in the later years to save his family from hunger, while the rest perished in the Holocaust together with Herman’s wife and their youngest daughter when Odessa was occupied. But there was something that did remain – a few dozens of postcards taken by Herman’s eldest daughter from Odessa to Moscow before the WWII. The postcards stayed in a shoe box till I found them in 2018. Written in Russian, French, Polish and German, they circulated between Odessa and Austria-Hungary, Britain, France, Germany and Poland in the early 1900s. The postcards show European and Jewish motifs, Art Nouveau and Berliner Secession styles, humorous vignettes. They are records of the family correspondence, geography and the wider history. 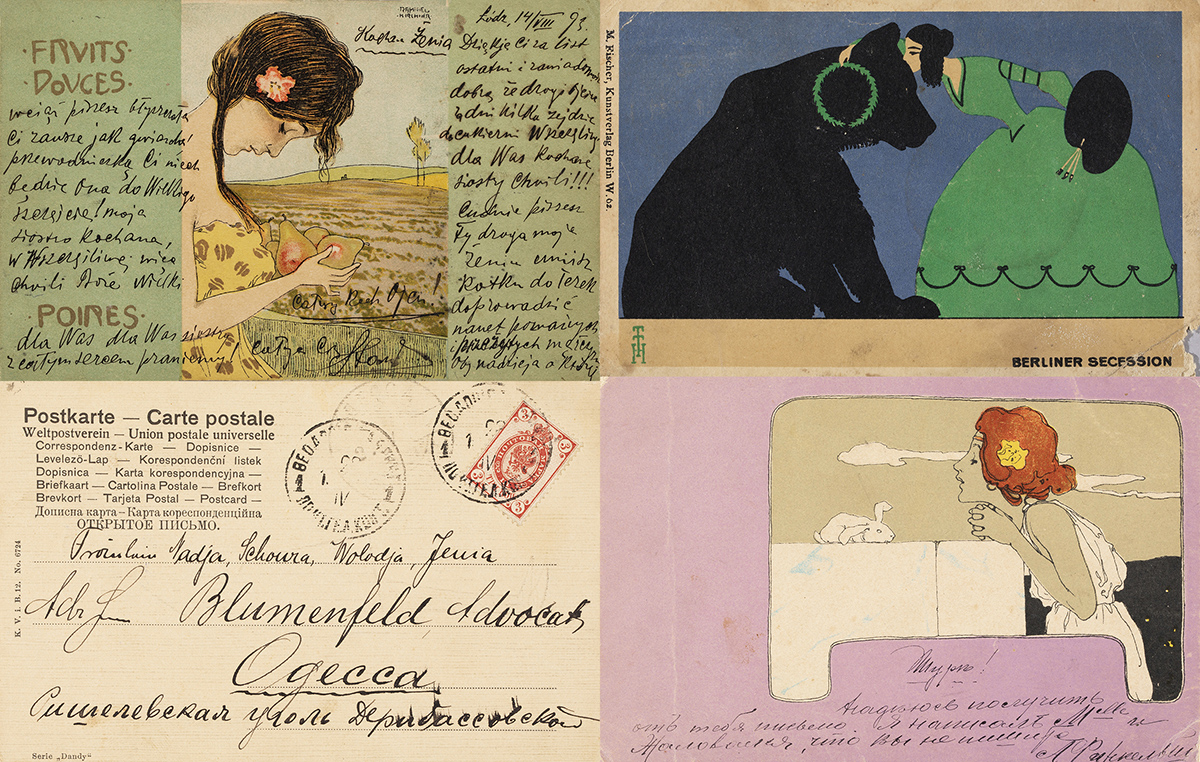 Since my discovery of the postcards I would return to them every now and then, try to decipher the postmarks and the text, research the addressees and the senders in an attempt to put the puzzle pieces together.

Here is what I assembled during Hanukkah and Christmas of 2019, the last week of the year and the decade.

This postcard was sent on 31 July 1905 from Basel (Switzerland) to Bad-Kissengen (Germany) during the 7th World Zionist Congress. The sender must have been the Russian-speaking delegate most likely from Odessa and a friend of Herman Blumenfeld. He writes: “I have never seen so many Jews. Greetings to You and Your family.’ (in Russian: “Я никогда столько евреев не видал. Приветствуем Вас с семейством”). Indeed, the reports say that over 500 delegates, nearly 200 journalists and 2000 guests attended the 7th Congress, the first one since the death of Theodor Herzl. The language of the Congress, both spoken and written, was German, though many delegates also spoke Yiddish and a Yiddish-like German known as Kongressdeutch. 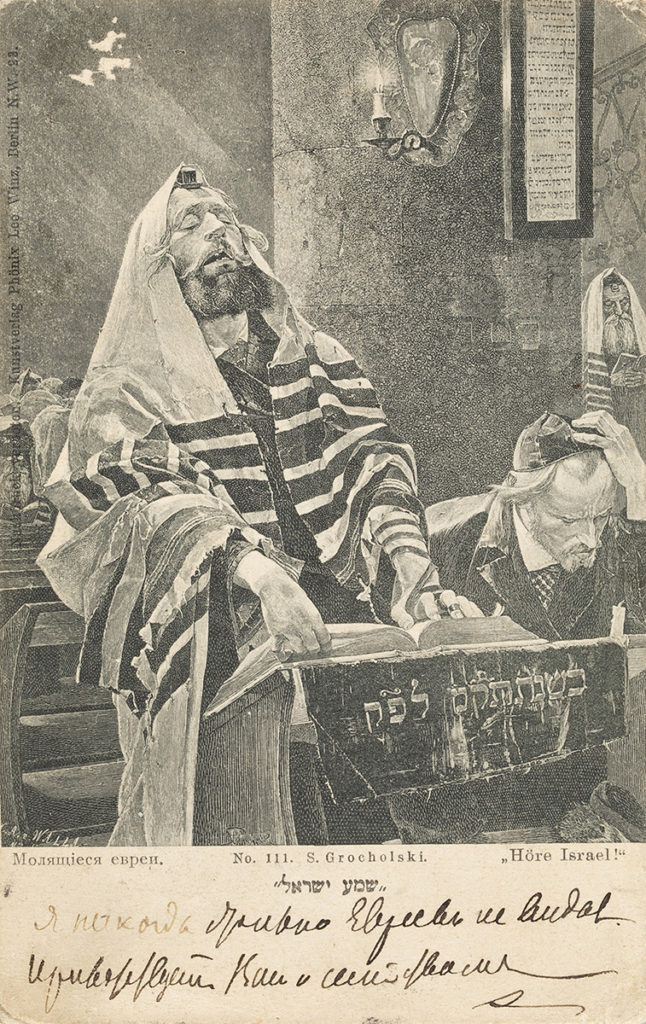 The addressee Blumenfeld was confused with the destination place – the postcard got delivered to the town of Blumenfeld in the Baden region on 1 Aug 1905. The mistake was corrected – the destination Bad-Kissingen was underlined and written separately in blue pencil, where it finally arrived on 2 Aug 1905. Being a serious collector, Herman removed the stamp neatly.
This mistake was just happenstance but a symbolic one for our family. The Jewish surname Blumenfeld has indeed roots in Germany. As it often happened with the German jews, many have been moving east to Austria-Hungary and Polish–Lithuanian Commonwealth, and later to the Russian Empire, eventually stopped by the Pale of Settlement. My great-great grandfather Faitel Hirsh Blumenfeld, was raised in Linkuva (present-day Lithuania), studied at the newly-opened rabbinical school in Zhitomir (1848-1858) and later became a Haskalah reformer, educator and crown rabbi of Kherson. Faitel named his eldest son Herman, the germanised version of Hirsh (Faitel’s father). In the years to come our family would be connected to the German-speaking lands in one way or another. Herman’s brothers Josef and Moses studied medicine in Vienna and natural science in Stuttgart and Berlin in the 1890s, while their other brother Jssidor was exiled to Germany from the Russian Empire in 1906 for his anti-tsarist activities and is buried in the Weißensee Jewish Cemetery in Berlin. Herman’s sisters Anna and Tsilia (my great-grandmother) became musicians. Tsilia studied music at Berlin’s Stern Conservatory in 1908-1911, while the youngest of them all David worked in the Soviet Embassy in Vienna and Berlin in the 1920s. During the Stalin Purges David was accused of being a German spy and shot in 1938. Tsilia and David’s son Volodya were killed in the Holocaust in Crimea in 1941. Our physical link to Germany would be broken for the next 50 years till the fall of the Berlin Wall and the collapse of the Soviet Union. Our emotional and historical rupture would last longer. Postcards would become the first meaningful cracks in the silences, followed by findings in the Russian, German and Austrian archives, Weißensee Jewish Cemetery, and of the lost family branches.
Why Bad-Kissingen? Herman and his family would regularly come to German spa towns in the summertime. Mirjam Zadoff’s ‘Next Year in Marienbad: The Lost Worlds of Jewish Spa Culture’ gives an insight into ‘Jewish space’ in European life between 1870 and 1938. Spas as modern medical and tourist centres attracted innovative physicians, entrepreneurs and intellectuals, and were considered a representative element in the process of bourgeois socialisation for both Jews and non-Jews. The spa towns cre­at­ed spaces of cul­tur­al diver­si­ty among the Jews too – from obser­vant Hasidic Jews to the assimi­lated Jews of Ger­many and Aus­tro-Hungary. The Pol­ish and Lithuan­ian Jews often stuck close­ly togeth­er, rent­ing entire floors in hotels for the rebbe and his court, and were a source of fas­ci­na­tion for those vis­i­tors from West­ern Europe. There was also plen­ty of stan­dard anti-Semi­tism in the spa towns, and post­cards with crude jokes and car­toons of Jews were a common-place.
Blumenfelds were not an exception to the complex picture full of nuances. This is a 1904 postcard sent from Karlsbad (present-day Karlovy Vary) to Odessa by Herman’s wife.
Her text would be seen these days as narrow-minded and even racist, yet it shows what a person with limited exposure to the cosmopolitan world, would find in Karlsbad of that era  – “i have not seen many jews like this one here, but there are many negroes, arabs, turks, persians, all that exists in the world and in the geography’ (“таких евреев тут мало, но зато сколько негров, арабов, турок, персов, все что есть в мире и в географии есть тут”).
Jerome K Jerome, in his ‘Three men on the bummel’ (1900), writes about the same phenomenon in a rather more literary and cosmopolitan manner:
“Good Germans, when they die, go, they say, to Carlsbad, as good Americans to Paris. This I doubt, seeing that it is a small place with no convenience for a crowd. In Carlsbad, you rise at five, the fashionable hour for promenade, when the band plays under the Colonnade, and the Sprudel is filled with a packed throng over a mile long, being from six to eight in the morning. Here you may hear more languages spoken than The Tower of Babel could have echoed. Polish Jews and Russian princes, Chinese mandarins and Turkish pashas, Norwegians looking as if they had stepped out of Ibsen’s plays, women from the Boulevards, Spanish grandees and English countesses, mountaineers from Montenegro and millionaires from Chicago, you will find every dozen yards.”
Postmarks (dates and places), the short texts and the contextual information I learnt prompted by the postcards discovery, tell a story of Jewish spa culture in the centre of cosmopolitan Europe, of the World Zionist Congresses, of one Jewish family links with Germany and of how to read an object.
*******
It so happened that for years I have been collecting old postcards myself. Little did I know that one day I would come across an interesting archive in my own family. And here comes one more accidental encounter. Herman’s two daughters stayed in London in 1912. Among the Blumenfeld’s collection I spotted four postcards with views of London by night taken in the Hastings photographic studio by Fred Judge. What a surprise it was to discover two postcards with views of London by day taken in the same studio in my own collection. It felt like a full circle moment – London by night and London by day reunited 100 years later.
I set off on a journey not knowing where I was going. It was not the destination that defined my journey. Rather it was my tolerance for incomprehension, my willingness not to know entirely why, my intuition to follow my own curiosity.
I am still on this journey, every now and then I discover a name, an archival record, a trace, an online article, a physical object.
to be continued…